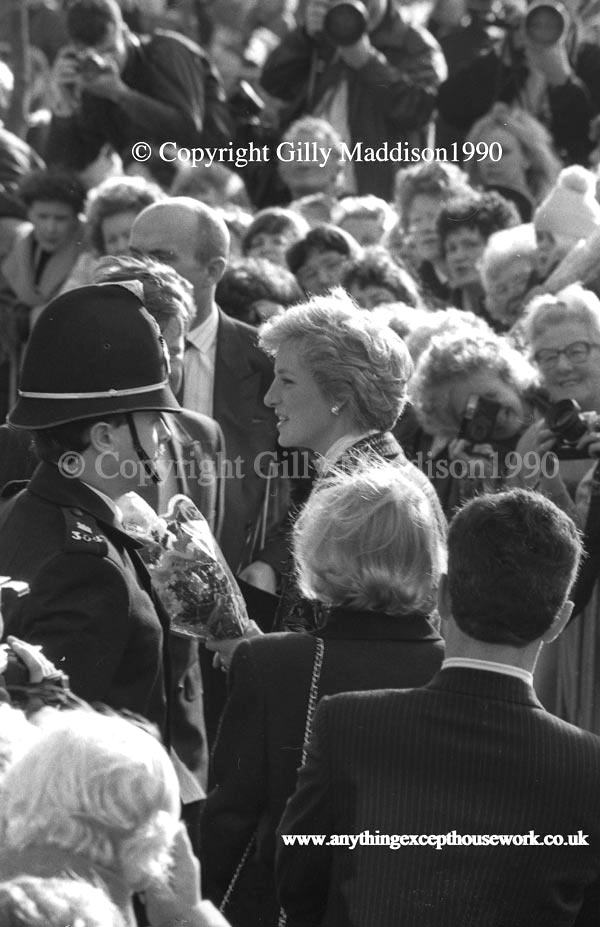 Princess Diana - the way it was for her. For me, this picture really sums up everything about her public life at that time. Cameras pointing at her, body guards and police surrounding her, the Lady-In-Waiting at her side, and hoards of people clamouring for a glimpse. And of course, an apparently serene young woman in the centre of it all.

Princess Diana's death almost 20 years ago remains one of the most shocking events in royal history.

Although I am not a royalist, every year I remember  Princess Diana's death and the significance of August 31st.

During my career as a press and pr photographer, I photographed several members of the royal family. It was always a chore to me.

All the protocol and pomp annoyed me and I hated the whole set-up with a passion.

Although us ordinary folk could see Princess Diana for what she was, a rich, privileged "Sloane Ranger', we did love her.

And I could see why once I had photographed her - she was so different to the other high-profile royals I had photographed. Her whole manner was different. She was pleasant to those of us on the royal press rota and she was genuinely warm and human towards those who were presented to her - especially children.

Princess Diana's death made many people, even royalists, question the establishment.

Princess Diana was different to all the royals who came before her, as we have seen in the many documentaries about her life, made over the last 19 years.

This is one film, https://youtu.be/oKqxxMFXSZw currently on YouTube, which gives a revealing insight into the reality of life after marriage into the British royal family.

This is another, more restrained look at Princess Diana's downfall through the eyes of the BBC - https://youtu.be/SvJfZmkkIwQ

Princess Diana may have been a privileged, aristocratic rich girl but she was still a victim of her birth circumstances.

She was probably as much a victim of being born into a dysfunctional family as any such child, regardless of class.

In Princess Diana's well documented case, she simply suffered whatever trials befell her while surrounded with more luxury than most children ever have and, in a much bigger house.

To commemorate the 19th anniversary of Princess Diana's death - August 31st 2016 - I have updated the article I wrote this time last year in which I shared some of my precious personal photographs of her.

At that time, I picked out the pictures that I think convey the love and adoration that surrounded her wherever she went. The sequence below is one of my favourite images from my collection. I will never forget how those of us in the room struggled to keep our composure while the children outside interrupted the official speeches with their antics. Diana herself started to giggle and really showed her true heart.

Princess Diana - Trying to keep a straight face during a speech. While the local 'great and good' droned their way through official speeches inside, outside, eager children clambered up a wall to try to get a glimpse. They were rewarded when they found themselves right beside her, separated only by  a window. They kept banging on it to attract her attention and the Princess tried so hard to ignore them. My sequence of pictures shows how she could not resist turning to look at the children. She really was the 'People's Princess'.

Like most people, I can remember the exact moment when I heard of Princess Diana's death.

I was halfway down the stairs at a friend's house. It was a Sunday morning and I had just got up. My friend was already up and had switched the TV on. As I came down the stairs, I heard the words that stunned the whole world.

I remember freezing and just standing there with the words 'Princess Diana is dead' ringing in my ears.

The following days and weeks were very strange.

To be living in the UK at a time when such an iconic British figure had died in such bizarre circumstances was an experience most of us will never forget. 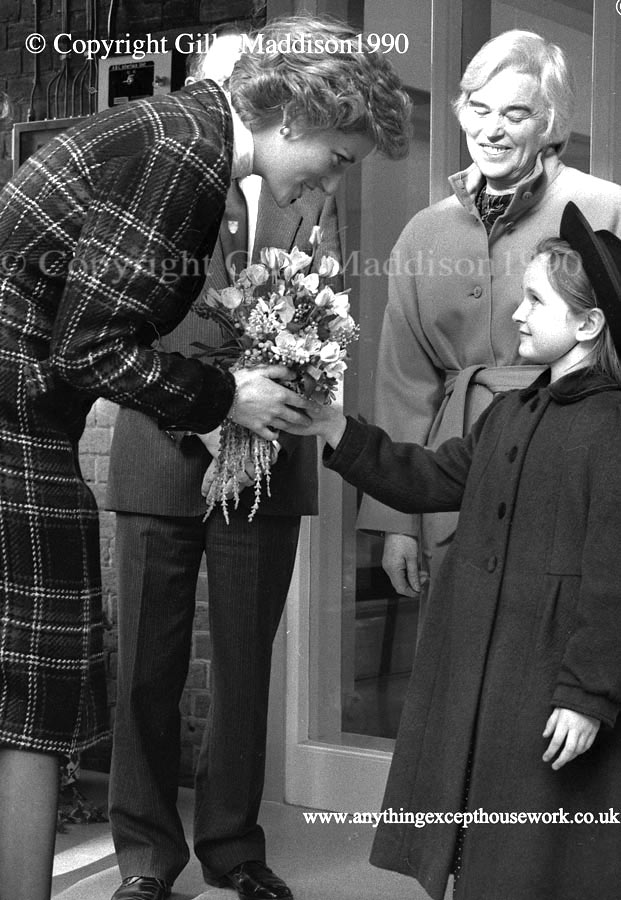 A proud moment for this little girl being presented to Princess Diana - You can see by the eye contact between Diana and the child just what a warm person she was. She was not stiff and starchy, just going through the motions of meeting ordinary people as a duty.

In the course of my job at the time, I had to write about different aspects of Princess Diana's death.

On the day of the funeral, I had to write a feature describing public reaction and the atmosphere in my town. I will never forget going out to see what was happening in the town centre as the funeral unfolded. It would normally have been a very busy, bustling day but everywhere was deathly quiet. The town hall steps were a mass of brilliant color from the thousands and thousands of flowers that had been placed there by the grieving public in the days following the crash. 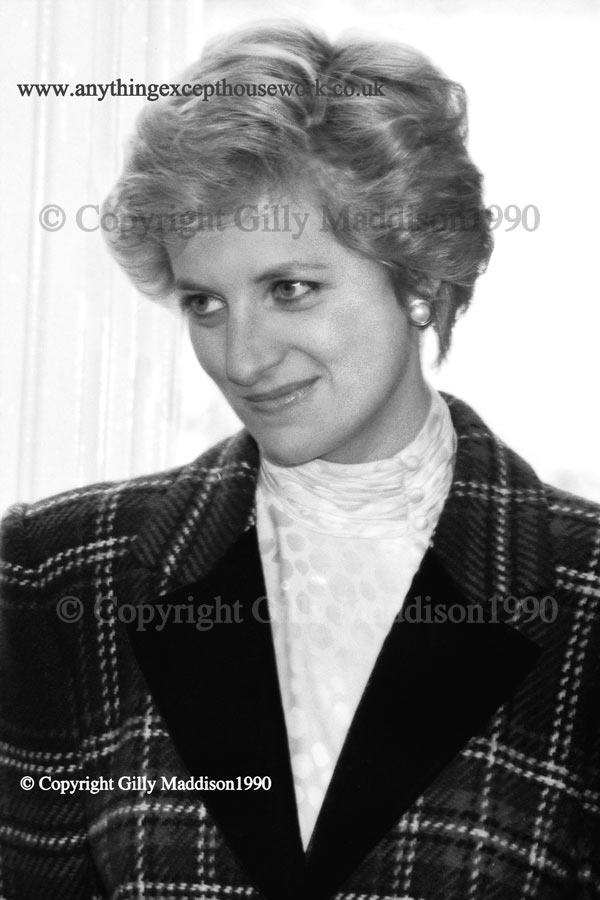 Princess Diana - this 'look' earned her the title 'Shy Di'. This is another of my favorites as I was so pleased to have had the opportunity to capture 'the look' that made her famous throughout the world.

The shock and grief on the day of Princess Diana's funeral were palpable.

It was quite an eerie sensation to stand in the middle of a silent town and feel the emotion.

Many people have scathing opinions on the mass hysteria and public outpourings of grief often seen following tragic high-profile deaths and I agree with much of what has been said about such reactions.

However, although relatively few of the people grieving had actually met Princess Diana, she was very much a part of the fabric of British life.

She was loved with a passion that transcended any ill-feeling towards the elite section of society she came from.

People loved her so much, we almost forgot she was from the privileged classes. 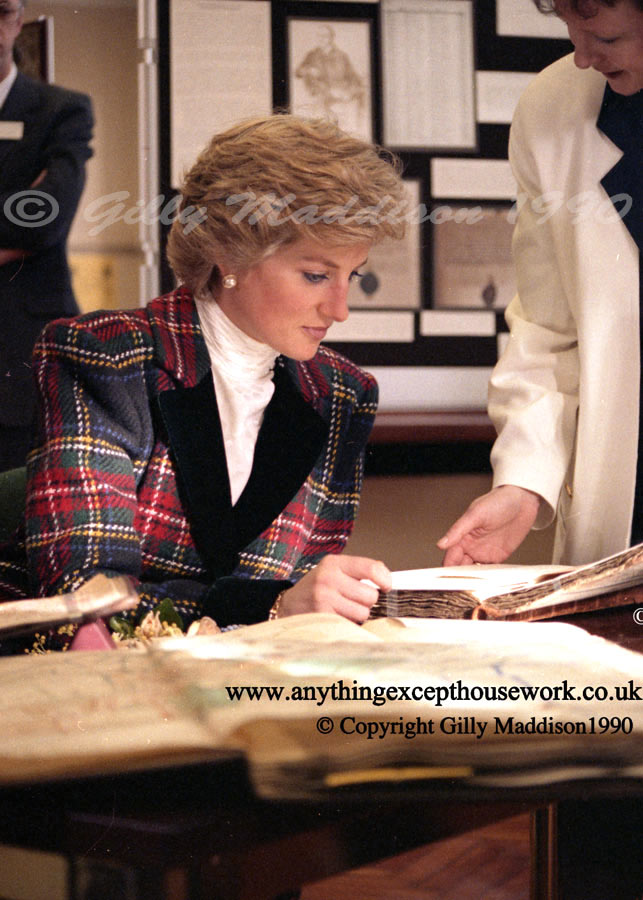 Princess Diana - appearing serene and relaxed in public.  My final choice shows how poised and relaxed Diana seemed. She had a definite aura of calm about her which I think this picture really emphasises. Who knows what torment was going on inside her?

Princess Diana truly was a warm, caring person, wherever she came from.

I felt privileged to have been in her company and to have had the chance to take these precious pictures.

She was 'unlawfully killed' - that was the official verdict of the inquiry.

However, if you want the truth about that, you really do need to watch the film 'Unlawful Killing' by Journalist and film-maker Keith Allen.

It will shock those who still think her driver Henri Paul and the 'paparazzi' were responsible.

It was a difficult film  to find and has never been seen in UK mainstream cinemas to my knowledge.

And so once again, on this tragic day in the history of Great Britain, we remember Princess Diana's death with sadness and her life with joy - RIP Diana and Dodi.